In the belongings of Honor Mary Thwaites we inherited this large framed photograph of a company of men around a board table, with the sole caption on the mounting-board “Wellington Church Council, 1903”.  On the back “Mrs Good” was pencilled in a large freehand, suggesting a removalist or delivery instruction.  None of the individuals were identified. Why had this group portrait been kept in the family for a century?

There are in , and , but with no known family connection.  A search on “Wellington Church Council” brought up the website of a in – a fine neo-classical building in the heart of the University.

I knew that there had been forebears in   named Scott, so in 2006 I emailed the Church administrator asking whether they knew if anyone by that name had attended a Church Council in 1903.  A return email from the then Minister, Leith Fisher, confirmed that this was a council sitting of the Wellington Church, and that the room and the photographs on its wall still existed at the church. He added that the size of the actual room meant that the number of men seated around the table in the photograph was physically impossible – the photograph had to be a contrived composite – “Photoshop” 1903-style.

Indeed, a close look at the photograph does reveal some odd body positions, heads too big for bodies, inconsistent shadows and other evidence of cut-and-paste.  Mr Fisher could not help with names, and I heard no more.

Later my uncle Roland Good visited. I showed him the photograph and asked whether he knew of any Scott relatives from Australia who might have been in   at that time.  He didn’t know of any, but mentioned that there were numerous Mitchell relatives in   who had kept contact with older generations of the Scott family in Australia.

The next link in the chain was a notice from an online genealogy network that there were common ancestors on the Thwaites-Good-Scott line with the family tree maintained by Dugald Scott Mitchell, of Cooma.  I established contact with Dugald, who gave me access to his extensive family tree covering many generations of Scotts, Mitchells and all who sail with them.

By now it was clear that the “Mrs Good” was not my grandmother Viola (Wettenhall) Good but my great-grandmother Sarah Cowie Scott Good. Her mother was Sarah Cowie Mitchell of , who had married Robert Scott there before emigrating to around 1840.

Sarah Cowie Mitchell Scott had died at Buninyong, Victoria, in 1899, before the date of the photograph. She had several siblings who stayed in Scotland but only one, her youngest brother John, seemed likely to be in in 1903.  This John Mitchell would be the uncle of Sarah Scott Good, so perhaps close enough for her to treasure the strange photograph.  Sarah Scott Good was the eldest of Sarah Mitchell Scott’s children and was herself a widow by this time. Her Scott brothers were helping to support the education of her three Good children Charles () Scott, Robert () Scott (Honor’s father), and Irene Scott Good.

I wrote again to the in , this time asking whether John Mitchell could have been a member of the Council. The Church Administrator, Anthea Cameron, kindly enlisted the help of church historian Mr John Fyfe Anderson. Mr Anderson’s response was more than I could have hoped for. The Mitchell family had founded the church in 1792 and supported it for two centuries, including the period of the photograph. Here are parts of Mr Anderson’s information:

John Mitchell was a grandson of The Rev. Dr. John Mitchell the first minister of . It is likely that John Mitchell appears in the 1903 photograph but it is obviously impossible to identify him.

In the photograph The Rev.Dr. James Black is seated at the head of the table with The Rev. Dr. George Morrison on his immediate right…

[The founding ]Mr. John Mitchell obtained an MA at in 1787 and … was licensed by the Presbytery of Perth c.1792.  The congregation was formed in in 1792 and its first Church was in .  Mr. Mitchell was ordained on 1st August 1793.  Present at the service was Rev. Andrew Mitchell of Beith, the father of the young minister…

The moved again to its newly built church on , opposite in October 1884.

“Erected by the congregation assembling in this place, in affectionate remembrance of their late pastor, John Mitchell, DD., STP.  Possessed of highly cultivated talents of enlightened and fervent piety, singularly amiable and gentle in his disposition, simple and yet dignified in his demeanour.  He was a faithful and eminently successful pastor, a most affectionate and skilful tutor, the kind and generous friend of youth, and a pattern in all his relations, domestic and social.  Born October 15, 1768;  ordained to the Ministry of this congregation August 1, 1793:  Elected Professor of Biblical Criticism by the Associated Synod, September 15, 1825:  Died January 25, 1844.  *His remains repose in the crypt of this church...”

…The portrait on wall in the right-hand corner [of the photograph] is of a gentleman resting his elbow on a table in a thoughtful pose with folded fingers on the side of his face.  This is the Rev. Dr. John Mitchell, and possibly a very good reason for the picture to be in your family’s possession.  The original portrait is large and displayed in the upper corridor here at along with other past Ministers.”

While John Mitchell cannot be identified with certainty, I think the most likely candidate is the man sitting directly below the portrait of the founder with pen at the ready and a ledger book before him. If  I were posing a formal group on this occasion, that is where I would put him.  The man with the ledger is evidently an office-bearer of the Council.

The Mitchells and the Scotts had large families and had the habit of using the same names over and over. In each generation over two centuries the Andrews, Johns, Roberts and Thomases overlap each other, often more than one to the generation.

In in 1903 there were probably three John Mitchells, all descended from the patriarch Rev. Andrew Mitchell of Beith(1737-1812) and possibly attending Wellington Church:

Mr Anderson’s information suggests Sarah's second cousin is the one in the picture – but there could have been more than one John Mitchell present at the time.  Perhaps both the men sitting under the portrait are John Mitchells? Could one be Sarah's Uncle John?

[UPDATE  26 July 2011]
A family photograph in the possession of my uncle Roland Good shows his father, Robert Norman Good, visiting "his uncle" in Glasgow in 1910. This could only be Norman's great-uncle - namely Sarah Cowie Scott Good's uncle John Mitchell.  We now know, from Dugald Mitchell, that this John Mitchell died prosperous but unmarried in 1914 in Glasgow, and bequeathed many of his belongings to nieces and nephews in Australia.

Comparing this photograph to the Wellington Church Council of 1903, that John Mitchell can be seen standing under one of the portraits on the wall, at the back of the group. 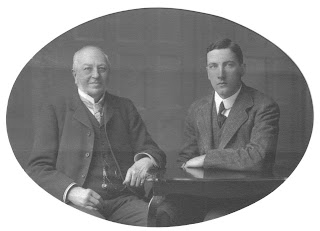 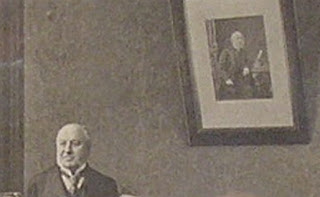 More about how the photograph found its way to may be buried in correspondence now in the National Library of Australia or other Scott family collections. From Sarah Cowie Scott Good it passed to her unmarried daughter Irene Scott Good, then to her granddaughter Honor Mary Scott (Good) Thwaites.

Also in the family are two versions of  a portrait of patriarch Rev. Andrew Mitchell (1737-1812), father of Rev. Dr John Mitchell.  One is from the collection of Dugald Mitchell, of Cooma, who is the main historian of the Mitchell family in Australia and their roots in Scotland.  He identifies this as Rev Andrew. 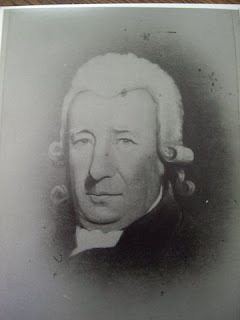 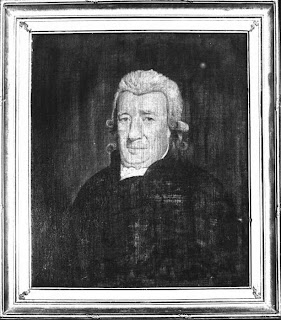 The second version is now with Honor’s sister Esther Scott (Good) Wettenhall in . The similarities are so close, one wonders if one were copied from the other.  This Andrew Mitchell was ancestor to both the Mitchell family (through Thomas) and the Scott family (through Sarah Cowie (Mitchell) Scott, sister of Thomas and wife of Andrew Scott of Buninyong.  Along the way, this version has also been identified as Andrew Scott, but it seems to have been his father-in-law instead.  Any correction or confirmation will be welcome.

Posted by RichardNThwaites at 5:03 PM 3 comments: