Joe (John Duncan) Thwaites contributed this transcription he made in 1973 from a gravestone in the churchyard of the Anglican Church of St Columba in Topcliffe, Yorkshire.  The stone is/was positioned diagonally behind the tower and right side transcept of the church, not far from the top of a steep slope down to the River Swale (presumably the “cliffe”).


The picture is "reconstituted" - not the actual stone... 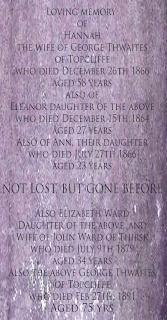 ..and here, for clarity, is the text as transcribed by Joe..

NOT LOST, BUT GONE BEFORE

Also Elizabeth Ward
Daughter of the above, and
Wife of John Ward of Thirsk
who died July 9th 1879
aged 34 years
Also the above George Thwaites
of Topcliffe
who died Feb 27th, 1891
Aged 75 yrs

Posted by RichardNThwaites at 11:53 AM No comments: