Do you know any more about these people?

From Michael and Honor Thwaites we have inherited a trove of family photographs going back several generations.  Some are identified but many are not.  Without identification, they will become meaningless to future generations of their descendants.

Some Thwaites material is in albums kept by Eva Hardwick Thwaites,  aunt of Michael Rayner and Peter Nelson, who lived single in England until 1977. An album then came to Michael Thwaites in Australia. Most are captioned on the back in her handwriting, but some of the captions are missing or cryptic.

Please add any information or comment that you may have. 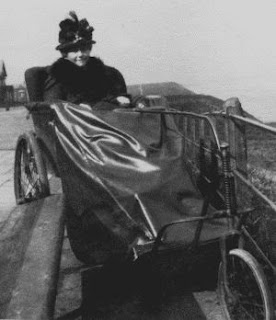 This is Phebe "Lizzie" (Hardwick) Thwaites, mother of Robert Ernest, on a seaside excursion (in the 1920s ?). She was born 1855 in Pickering and lived till 1924, much of the time  in Boroughbridge, Yorkshire. Eva did not caption this photo, nor the one below. Apparently Lizzie had a period of invalidity but later recovered.

Phebe's husband John Thwaites  was born 1849 in Topcliffe, Yorkshire and died 1914. Is there any picture known of John Thwaites?? 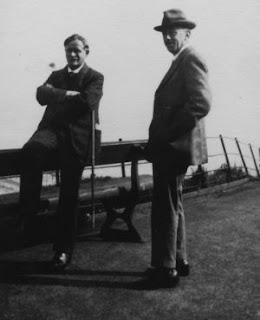 These two gents were with Lizzie on the excursion - same bench, same fence - but no names.

The one on the right is definitely Francis (Frank) William Thwaites (1883-1954).  Frank emigrated to America in about 1908, returned in 1914 to support the British war effort, then returned to USA in 1920 with wife Daisy and new baby son Donald Hardwick Thwaites.

On the left son George (1881-1941), eldest of the family and a chronic depressive who never left home and lived with sister Eva after his mother Lizzie died. He looks cheerful enough here. 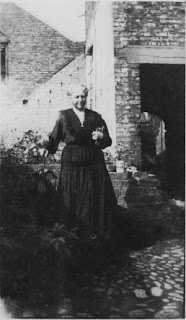 This is Lizzie Hardwick Thwaites somewhat later. Not dated but it is captioned "Mother, plump at last after the lean years. at Bb [Boroughbridge, Yorkshire] ". The caption is clearly by youngest daughter Eva (1888-1977) who never married and looked after parents in their old age at Boroughbridge, before leaving for teacher training and a lifetime teaching in Sheriff Hutton. This is probably the garden of the house the family lived in for many years at Boroughbridge. What else is known of that life? We have a few letters and various books bequeathed to her nephew Michael Rayner Thwaites. 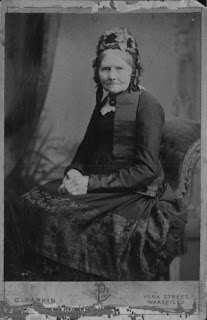 Back another generation, this is captioned "Grandma Hardwick", so it must be Lizzie Hardwick's mother.

Jane Hoggard married and had several children by John Hardwick, a yeoman farmer of Pickering. She was widowed early, managed the farm and six children on her own, then married again to ? Brown. She was widowed a second time, and when this photo was taken was living with her youngest daughter Phebe in Osset, near Dewsbury.

Now some Nelson material from Queensland.... 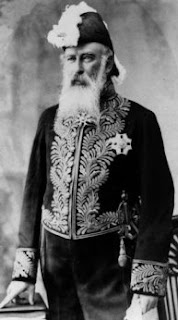 Solomon in all his glory...

This is not a family photo but from the archives of the Queensland Parliament, used in an article on Sir Hugh's canny political career in the online Australian Dictionary of Biography. See Google for more..


Below is captioned "Mrs Nelson (later Lady N.) at croquet with friends at Gabbinbar, Toowomba, Queensland" - Sir Hugh's family home.   This suggests it was taken before 1896, when Sir Hugh was knighted KCMG for his political service.

I'm not sure about the "friends" - behind the fashionable fly-proof burqas.  I think we might find Mrs Nelson's three lively daughters Grace, Jessie and Maude. The full photograph shows a wider vista of landscape receding eastwards toward Brisbane and the coast. 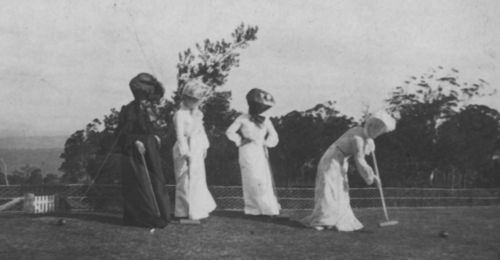 This is the oldest Thwaites /Nelson material we have.  There is plenty more from Jessie's albums that follows the childhood of her two sons Michael Rayner Thwaites (1915-2005) and Peter Nelson Thwaites (1917-82). Cousins from the Nelson side are well represented, but no photographs from the scattered Thwaites cousins in USA and Canada.

Please comment if you would like to see more... it is simple for me to post progressively to this blog.
Posted by RichardNThwaites at 6:28 PM No comments: